Story #5: From Comfort to Sacrifice to Compromise Again 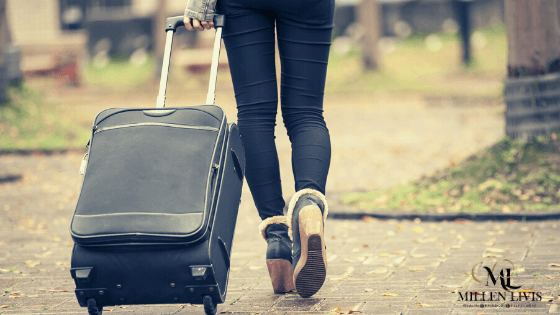 After the confrontation with my husband’s mother, we had our talk….

We left everything we had accumulated for the last eight years and lived from a suitcase for months.

Along the way, our luggage was stolen, so we literally only had the very basic necessities…but we kept going.

We had to travel through many countries without the proper documents, and the journey took about five months.

When we got to New York City in March of 1990, we started with a few adversities….

My husband got very sick and had a high fever.
I didn’t speak English.
We didn’t have jobs.
We were almost out of money.

And yet…the moment I stepped on the ground in New York City, it felt wonderful!

My “inner compass” had tapped me on the shoulder again and said, “You’re home!”

I felt grounded…though in uncertainty.

The beginning of our “new life” in the U.S. was challenging:
I took a minimum wage job at a local florist shop and learned how to say, “What would you like?” LOL

We had to go on welfare…for six months!

I volunteered for a local hospital and took care of my daughter’s depression (from being separated from her grandparents).

However, I kept my focus on getting a professional job so I could support my family.

That was an important milestone for us.

As I self-taught English, I was dreaming about being a physicist again….

However, my husband – being a very practical man – said: “It doesn’t matter what you love, in this country, even musicians become programmers, be practical!”

And so, in the spring of 1991, I was hired as an IT consultant for Merrill Lynch and started working in the World Trade Center in NYC.

On the outside, my life in corporate America was the typical American Dream.

I worked hard, and as my skillsets grew, I advanced my career and was moving from one major brokerage firm to another, almost always in the World Trade Center in New York City.

I worked with mostly men, and learned to survive by becoming “one of the boys around the water cooler.”

It wasn’t the way I wanted things – but it was what had to be done to get along.

Eventually, we bought a house in New Jersey, and my husband and I commuted about 90 minutes each way, every day.

We were both making good 6-figure incomes.
He took care of our money and settled in decorating our house, being a wife and mother at home, and “one of the boys” at work.

I wasn’t paid as well as men at my same level, but I accepted that as a fact of life and kept moving ahead, conforming again, just to get along.

It wasn’t what I wanted, it wasn’t what I dreamed I’d do with my life, but it was comfortable, and I was so busy, I didn’t think much about my future.

What did you have to do instead of following YOUR dream?

What sacrifices have you made for your family?

Which dreams did you have to compromise on?

How to Overcome Fear of Investing

There Are Two Categories of Women. Which One Do You Put Yourself In?

5 Tips to Overcome Fear of Investing