Story #6: Surviving in Corporate America in the 90’s 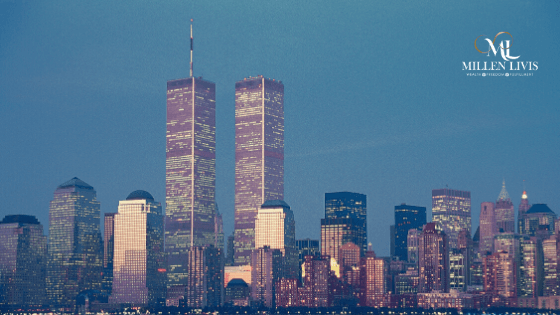 In 1992 my parents re-united with us in the States…. My father had liver cancer and died four days after his arrival….

Before he died, for the first time in my life, he said, “I love you, and I’m sorry for the way I treated you as a child… I just wanted you to know how to SURVIVE.”

I didn’t realize it then, but SURVIVAL would become a major theme in my life for the next ten years.

And the more I worked in the corporate environment, the less satisfied I became.

We would work on projects for months, I would inspire my team to do their best work, and then…someone from the “higher up” would cancel our project.

And most of the time, we didn’t even know “why”…

It was all so superficial, so meaningless for me. My work became just a way to survive, to pay the bills.

My ultimate reminder of this came in 1994!

I was working in the World Trade Center (WTC), Tower 2, on the 56th floor, when the first WTC bombing happened.

The explosion blew up the parking garage and filled the building with smoke.
At first, we were not allowed to leave, and it was terrifying.

In moments like that, you often start thinking about what’s really important in your life….

When they finally let us go – we had to walk down the staircases in the dark, 1000’s of people, holding hands and trying to help one another survive.

When I reached the ground floor, I was still in shock and covered in smoke. It took hours to walk home… and let my family know I was OK (there were no mobile phones at that time).

On that day, I learned TWO life lessons:

– Your life can change in an instant, and
– It’s vital to appreciate what you have before it’s gone.

Many of my coworkers decided not to come back to the company after this scary experience. I chose to stay and to appreciate what I had, putting my dreams on hold again.

Throughout the ’90s, my husband and I continued to work in the World Trade Center, commute 3 hours a day, while raising our daughter.

It all looked great on the outside – comfort, parties, beautiful house – but the stress of conformity was getting to me.

For my entire life, it has always been very important to me to feel that what I do, what I spend my life on, is something that creates a difference in the world.

My corporate job didn’t do that….

My work became so meaningless to me—just a way to pay the bills.

Being comfortable financially but feeling “empty inside” was NOT enough for me anymore!!

And so, to cover my pain and disappointment with myself, I developed some bad habits… I became a shopaholic.
Instead of dealing with the pain in my heart and soul, I was avoiding FEELING numb inside by spending money on “stuff.”

I knew I wanted more than Survival, and somehow I knew I could be more!

But I felt STUCK!

My daughter was doing great, but like all young girls in their late teens, she was thinking about her friends and going off to college.

In addition to working 50+ hours a week, my husband had decided to pursue his dream and started a software consulting company with several of his friends.

Because he was working another 50+ hours a week on his new business…we hardly talked to each other, except for an occasional long commute home, when we were both too exhausted to even talk.

I ended up doing everything at home because he was never there….

Instead of a husband, I had a roommate. Instead of raising our daughter together, I felt like I was a single parent, raising an unhappy teenage daughter because she had an absentee father.

I was 42, I WAS ALONE, UNHAPPY AND UNFULFILLED, facing an empty house and a meaningless life.

And so, I became angry and frustrated.

Not so much with my life situation, but with myself…
I felt disappointed in myself for not having a clear plan, and for ignoring my dreams for so long.

My daughter was leaving for college, and my “inner compass” tapped me on the shoulder again and kept asking,

I remember the moment it all came bursting out of me, like a giant firehose of emotions:

It all burst out of me…and I recall screaming at the top of my lungs:

“If I have to conform for the rest of my life – what’s the point?”
“I have to do something NOW because I’m wasting my life.”

This was a pivotal moment in my life!

That admission, that personal confession that I finally put into words, fired me up, and moved me forward.

I was ready to Dare and Change My Life.

The first thing I did…applied and was accepted to The Wharton Business School of the University of Pennsylvania, executive M.B.A. program.

Do you have a plan for when “unexpected stuff” happens in your life?

Have you ever had a job that was meaningless to you – just the means to survive, pay the bills?

Have you ever felt “stuck”? At your work? In your relationship?

Have you had this feeling, “I am wasting my life…I’ve got to change!”?

Story #2: The Things Women Are NOT Supposed To Do

Previous Post Story #5: From Comfort to Sacrifice to Compromise Again Next Post Story #7: The Ultimate TEST of My Convictions that Saved My Life